People Aren’t Really Lost, Are They? 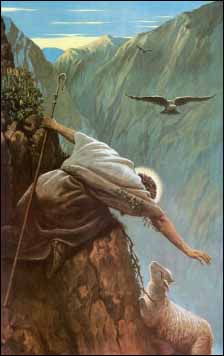 Friends gathered for the funeral of a 21-year-old who died in a motorcycle accident. They didn’t seem to connect with Jesus’ words that I spoke that day. They did connect, however, with the release of helium balloons that a family member had arranged after the service was over. That spoke to them. They weren’t Christian believers, so far as I could sense. Nor, from all reports, was the deceased a follower of Christ. He died without knowing Christ. He was lost — or was he?

“Lost” is an embarrassing concept that should be thrown on the scrap heap of bad doctrine along with “hell.” Instead, Christianity should stress love.

At least that’s what our culture tells us. The prevailing world-view in many regions of America holds several truths to be self-evident:

This point of view is called universalism. It’s popular, even with many who call themselves Christians. But how do we know whether universalism is or is not a Christian view?

What Did Jesus Teach?

Christians go back to the teachings of Jesus himself as the absolute authority for what constitutes true Christianity. After all, he founded it. So let’s focus on this single topic and inquire:

Locating the Word “Lost” in the Gospels

In examining the Gospels which record Jesus’ teaching, the English word “lost” appears in 16 passages that comprise eight separate teaching settings. (For the purpose of careful analysis I’m displaying the key Greek verbs. Greek, of course, is the language in which the New Testament was originally written.1)

I think we can agree that in #1 and #7 above, Jesus isn’t talking about lost people, but the other six passages he most certainly does.

To understand Jesus teaching about lostness, we must understand the Greek verb apollumi, “destroy.” It bears three basic definitions in the New Testament — and is used in additional passages besides the ones listed above:

So how does Jesus use this word in the “lost” passages? In the context of these parables he makes it pretty clear.

The phrase “lost sheep of the house of Israel” is explained in the context of the conversion and repentance of Zacchaeus, the Jewish tax collector, who was despised for his excessive taxation. Jesus says about Zacchaeus:

“Today salvation has come to this house, because this man, too, is a son of Abraham. For the Son of Man came to seek and to save what was lost.” (Luke 19:9-10)

By “lost sheep of the house of Israel” then, Jesus is referring to Jewish sinners, that is, Jews who haven’t yet repented of their sins. These people who believe in the Jewish faith, but who have strayed away, who are no longer following their faith, and who are in danger.

This understanding is reinforced by the Parable of the Lost Son or Prodigal Son (Luke 15:11-32). The younger son represents repentant Jewish sinners who return to the Father’s family, while the older son represent righteous Jews who don’t need to repent. The purpose of this parable is to explain why Jesus took time to welcome, minister to, and eat with “tax collectors and sinners” (Luke 15:1-2). On an earlier occasion, Jesus had explained:

“It is not the healthy who need a doctor, but the sick. I have not come to call the righteous, but sinners to repentance.” (Luke 5:31-32)

In some manuscripts, at least, Jesus repeats this saying in the immediate context of the Parable of the Lost Sheep (18:10-14): “For the Son of man is come to save that which was lost” (Matthew 18:11, KJV, Textus Receptus). This lost sheep “went astray” (planeō, “wander”). It goes off by itself in the steep ravines and gullies and becomes separated from the flock and the protecting shepherd. This “lost sheep” will be eaten by wild animals if left to itself. So the shepherd scours the hills until he finds it. In Matthew the “punch line” for the parable is this: “In the same way your Father in heaven is not willing that any of these little ones should be lost” (NIV, NRSV) or “perish” (KJV, apollumi, Matthew 18:14). This is the equivalent of saying, “God does not will” the perishing of any of them.3 The phrase “these little ones” here seems to refer to either children or disciples who are being lured by sin and temptation (Matthew 18:6, 10, 14). Jesus’ teaching here sounds a great deal Peter’s teaching decades later: “He is patient with you, not wanting anyone to perish (apollumi), but everyone to come to repentance” (2 Peter 3:9).

The point of this parable is finding and thus protecting sheep that otherwise would die from the elements or be ravaged by enemies. “Finding sheep” is obviously the act of rescuing or saving them.

Parables of the Lost Sheep and Lost Coin in Luke

Doubtless Jesus told his parables time and time again, sometimes stressing one point, sometimes another. As we have observed, in Luke’s Gospel Jesus uses apollumi in the sense of lost/found in three related parables: The Lost Sheep (15:3-7), the Lost Coin (15:8-10), and the Lost Son (15:11-32). In each case something is lost, searched for, found, and rejoiced over. In two of the three parables, Jesus explains what the rejoicing in the parable stands for:

“Just so, I tell you, there will be more joy in heaven over one sinner who repents than over ninety-nine righteous persons who need no repentance.” (Luke 15:7, also verse10)

Not one (disciple) has been lost

“While I was with them, I protected them and kept them safe by that name you gave me. None has been lost except the one doomed to destruction so that Scripture would be fulfilled.” (John 17:12; referring back to 18:9; 6:39)

Jesus, of course, is referring to Judas who betrayed him. It is pretty obvious that Jesus is talking about preserving a person for eternal life, which is the opposite of being lost in eternal death — one “doomed to destruction” or in the KJV “the son of perdition.”

Summary of Jesus’ Teaching on the “Lost”

I conclude that “lost” refers to unrepentant persons who will miss out on eternal life unless they are “found,” that is, rescued or saved and brought to a place of repentance and forgiveness.

Jesus’ teaching on lostness is unambiguous. Now it is a question of whether we want to believe it or not.

Do we follow our ungodly culture that has a strong motivation not to believe in hell and eternal lostness? Or do we believe Jesus, the Son of the God, who reveals to us true nature of spiritual realities?

If I have been accurate in explaining how the word “lost” is used by Jesus — and I invite you to check me out to be sure that I have done this carefully — then we followers of Jesus, we believers in Jesus’ teaching, must embrace Jesus’ concern for the lost — those who are doomed to miss out on eternal life unless they are “found” or “rescued.”

For too long many of us Christians have been embarrassed by the word “lost.” For too long we have banished it not only from our vocabularies, but have dropped rescuing “lost” people from our church priorities. We have succumbed to group-think and in the process have gotten badly off target.

Let us recover Jesus’ true heart towards the lost. To do this, first we must be willing to accept Jesus’ own teaching that people are actually “lost” eternally without his salvation. Second, we must adopt Jesus’ own passion to “seek and to save the lost.” Only then can we be classed as “followers” in this crucial part of Jesus’ mission. Only then will be truly loving to those who are lost.