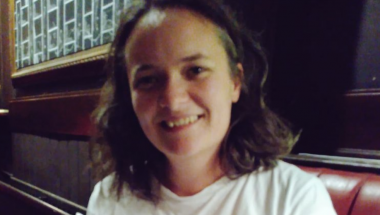 A presidential seat in Churches Together in England (CTE) is being left as an ’empty chair’ after a gay leader in the Quaker movement was nominated to the post.

Hannah Brock Womack was nominated by the Quakers but her appointment did not have the full support of CTE member churches because of her recent same-sex marriage to a woman.

CTE, the national ecumenical instrument, is represented by six Presidents from the major traditions of its 49 member Churches.

The member Churches are divided into separate groupings, with the Fourth Presidency Group having recently nominated Brock Womack as its choice of President to represent it for a term of four years.

In light of divisions among CTE member Churches on the issue of homosexuality, the group has been asked by CTE’s Enabling Group to refrain from enacting its nomination.

The Enabling Group said it had come to “a clear mind, by a substantial majority” on the issue.

In a statement, it said, “For the sake of our ecumenical unity at present, we request that the Fourth Presidency Group show restraint by not exercising the office of their Presidential appointment. We acknowledge the pain and sadness that this will provoke.”

The CTE said that Brock Womack’s recent gay marriage had prompted an ongoing process of discussion, listening and prayer in recognition of the different views held by member Churches regarding human sexuality.

Although Brock Womack is still officially the fourth President of the CTE, she will not be able to take her place alongside the other CTE Presidents at meetings.

CTE said that the fourth chair would be left empty “as a symbol of the work still to be done to find unity” and that it was committed to working with the Fourth Presidency Group to find ways to ensure that during her term of office, their “voice in the collective presidency is still heard”.

In statements released today, representatives of CTE and the Quakers spoke of the “pain” caused by the decision.

General Secretary of Churches Together in England, Rev Dr Paul Goodliff, said: “CTE acknowledges the pain and sadness caused by this decision.

“We recognise and value the important giftings of the churches of the Fourth Presidency Group, and the significant contribution they make to our ecumenical family.

“The Member Churches of CTE are committed to continue walking together closely in our pilgrimage of unity and witness to our shared faith.

“Listening carefully and deeply to one another and to God, and offering Christ’s love to all without condition, we will continually hold one another in prayer, seeking to maintain the unity of the Body of Christ which we receive as God’s gift.”

Mark Lilley, the Quaker representative to the CTE Enabling Group, said, “The grief this situation is causing Friends (known as Quakers) cannot be underestimated by other churches.

“Work must be done to heal the pain through creative conversations about our differences.

“We are confident that the ecumenical movement will continue to serve as a model of cooperation and mutual understanding that recognises the unique gifts of each member.”

Paul Parker, Recording Clerk for Quakers in Britain said, “This is a deeply sad decision. Quakers in Britain value the fact that CTE seeks to encompass the wide diversity among Christians in England. It is important to us that the Quaker voice is heard in discussions between Churches.

“As Quakers, we are called to answer that of God in everyone. We recognise the inherent worth of each person. That leads us to welcome all committed same-sex relationships as equally as committed opposite-sex relationships.We value equally all people, regardless of sexuality or other defining characteristics. These characteristics are not the right way to decide if someone is right to serve as our CTE President.”