Sting Unity Among Faiths And Sects 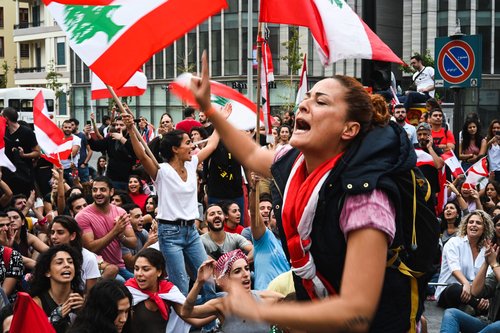 BEIRUT — More than three weeks of mass anti-government protests across Lebanon have not only united citizens across often fractious political and sectarian lines, but have brought about early signs of a new political system that could redefine how religious affiliation is lived in society.

“If we’re truly one, then we have to respect religion in its proper place — in the church, in the mosque, in the home,” said protester Maher Khani. “Not in the government.”

In Lebanon, religious identity is political identity, Khani said. It has been that way since the country’s unwritten 1943 National Pact, when the post-Ottoman country established its . Political and institutional power are distributed proportionally among religious sub-communities.

The president must be a Maronite Christian, the prime minister a Sunni Muslim and the speaker of parliament a Shiite Muslim. All of the country’s 18 recognized sects are allocated seats in parliament roughly proportional to their population size.

A 22-year-old woman who gave her name only as Maria said that ideally she and other protesters want the separation of religion and state they see in other countries. Lebanon’s history and demographics complicate that vision, though.

“I think there needs to be a new theory created for Lebanon,” Maria said. “People want secularism, but with 18 different recognized sects, let alone the others, what are we supposed to do to make sure everyone is represented?”

There have been some successes. Perhaps the most significant is the example set by the protesters themselves. have united across traditional religious and political faultlines. It’s a phenomenon not seen since before the civil war. An estimated 120,000 people died in its civil war that lasted from 1975 to 1990.

A protestor who declined to be named sat in a human roadblock in the center of the nation’s capital a day after Prime Minister Saad Hariri  The man said that a shift in the popular consciousness was palpable.

“The reason this really feels like a change for Lebanon is that people normally choose to identify with their sect rather than their national identity,” he said. “So when people stood hand in hand, regardless of their sect, it was something unheard of before. Religion was put aside. We identified with our nationality before anything else. One Lebanon. That’s how we’re going to win.”

Among protesters, most grievances are universal.

The burden of being one of the most in the world sits on the shoulders of the people, while the political elite siphons from the nation’s resources.

has taken to the streets calling for an end to years of government corruption and economic mismanagement. Shortages of fuel, bread and jobs have made people desperate for change.

Protesters say they can’t afford healthcare, and the cost of living is more than the average wage. Simmering frustration with these conditions was ignited by a mid-October government proposal to enact a flat tax on online call services like WhatsApp.

The government’s corruption is exacerbated by its sectarian divisions.

“Access to state institutions, state resources and how the government dispenses contracts all becomes based on sectarian identity, so that people end up mobilizing along sectarian lines because it makes sense,” said Bassel Salloukh, an associate professor of political science at the Lebanese American University.

According to Salloukh, the unprecedented reach of the protests shows that many are ready to embrace a Lebanese future that transcends traditional sectarian identities.Protestors in Beirut, Lebanon in October 2019. Photo by Finbar Anderson.

More than 170,000 protesters joined hands to  from the north to the south of the country. People of all classes, political stances, sects and religions joined forces and even attempted to pass a manoucheh, a traditional Lebanese pastry, from Sidon in the south to Tripoli in the north.

This Manou\u2019she got delivered through the human chain from South Lebanon to Beirut, and it’s being are passed on to the north!

Mohammad Hijazi@mhijazi
This Manou’she got delivered through the human chain from South Lebanon to Beirut, and it’s being are passed on to the north! 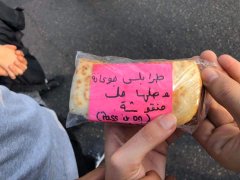 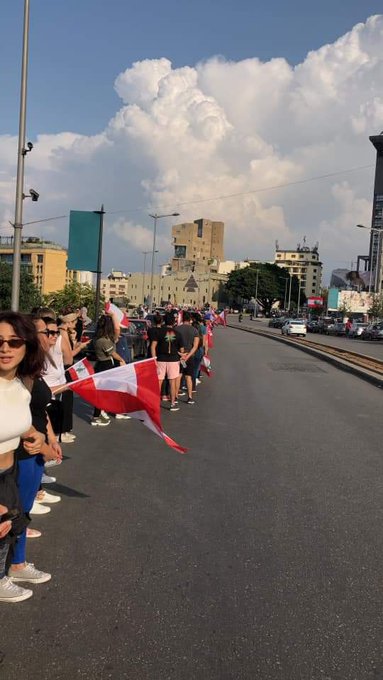 131 people are talking about thisTripoli is hungry, deliver this manoucheh to her,” said a message attached to the pastry.

“When you see Tripoli — which has always been presented to us as a Salafi jihadi bastion to counter the Shia southern suburbs [of Beirut] — saluting those southern suburbs … this is people practically proving the biodegradability of sectarian identities,” Salloukh said.

A desire for change has reached parts of the country where loyalty to established groups is normally unquestioned.

In the Shatila refugee camp in Beirut’s southern suburbs, infamous for  of Palestinian Muslim refugees by a Lebanese Christian militia, 25-year-old Aya lives in a neighborhood heavily supportive of Hezbollah. The Shia political party and militia is one of the strongest groups in the country. It and its political ally, the Amal Movement, another Shia group, dominate the local community.

Aya and many of her neighbors participated in the protests in central Beirut, joining in chants critical of the Hezbollah and Amal leadership. The protests “broke the fear” of voicing dissent against traditional leaders, she said. Yet many others remain loyal to their leaders and are invested in the established system.

There have been attacks against anti-government protesters by supporters of Hezbollah and Amal, in spite of the leadership publicly disavowing the use of violence.

While support for the protests is not universal, their unprecedented geographical and ideological reach has brought results.

After the government stepped down, President Michel Aoun , telling protesters, “You have succeeded in making [your voices] heard.”

He pledged to take steps to tackle deep-rooted corruption and quickly establish a new government.

As protesters spilled onto the streets of downtown Beirut after the speech, few were impressed by his promises. “He’s trying to stay in power,” said one young protester. “He’s one of the people who divided the country … Now he’s saying that he’s going to change everything and he’s against sectarianism? He’s lying.”

With the current system so entrenched, many wonder what the path to a different future should be. Birth certificates list the sect into which each citizen is born. Laws regulating personal status and family rights, affecting matters like divorce and the minimum age to marry, are administered by separate religious courts.

In his address, Aoun called sectarianism a “destructive disease” and committed to a unified personal status law that would guarantee equal rights across sects.

Previous officials, including the recently-dissolved government’s interior minister, Raya al-Hassan, have advocated allowing couples to marry outside their sects. Such moves have traditionally drawn backlash from the religious and political establishments.

While some protesters dismissed the president’s promises as window dressing, legal experts hailed the statement as an important milestone. Despite a number of draft laws being proposed, none has ever been discussed in Parliament. According to Lebanese attorney Youmna Makhlouf, an expert on personal status laws, such a public comment from a senior government official was a victory for protesters and a first for Lebanon.

The power of civil courts would be strengthened, as civil judges would have the ability to override religious courts in some matters.

The future is uncertain, but for Aya, the protests have already achieved something.