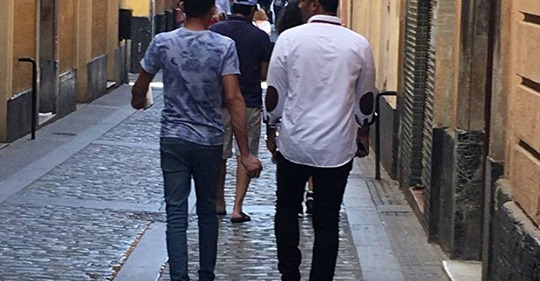 Fearing for their lives, Achmed and his family left Syria’s raging civil war and managed to make their way to Madrid, Spain.

Before they left Syria, Achmed had a powerful dream that God told him He wanted to know Him. He couldn’t get the dream out of his mind, but he didn’t fully understand it, so he continued to ponder it in his heart, according to a report by Christian Aid Mission (CAM).

European Union and Spanish authorities sent the family to the province of Cadiz in southwestern Spain, where a Christian ministry was helping to integrate refugees into society.

The ministry proposed putting refugees in apartments rather than camps, with the government subsidizing part of the cost.

Achmed was stunned that Christians would give so much time and effort to total strangers. One day he approached the ministry director, Pablo, with a question: “Why are you helping us in so many ways?” he asked.

“We believe in God, who loves people and wants us to help other people,” Pablo replied. “Jesus Christ came to die for us, and He asks us to die for you.”

His reply prompted even great curiosity about the Christian God, and he asked Pablo to tell him more. They had several more conversations, and soon Achmed began to attend Sunday worship services and some other activities. He began to read the Bible online.

One day he told Pablo, “All I have read, I believe. The only problem I have is God having a child.”

Like many Muslims, he had trouble with the idea of God having a Son. But in spite of that difficulty, he confessed that he couldn’t save himself from the death and eternal punishment that sin brings.

He confessed to Pablo his need for Jesus Christ, put his faith in Him as his Lord and Savior, and was born again.

Then God reminded Achmed of the powerful dream.

“He said that he remembered having a dream in Syria in which God told him He wanted him to know Him, and now he knew what it meant,” Pablo said. “He became a believer three months ago.”

“Thousands of such Muslim refugees are streaming into Spain as other countries of Europe turn them away, and many are coming to Christ every month,” according to the report by CAM.

“The former Muslims face daunting pressures. Achmed’s wife sought to divorce him after he became a Christian, and only after many talks with native missionaries did she and her mother accept Achmed – and Christ.

“Now they also come to church, and God is working in their lives,” the ministry director said.