Kanye West Tells Kim Kardashian To Stop Wearing Revealing Dresses, As It ‘Affects Him’ As A Christian 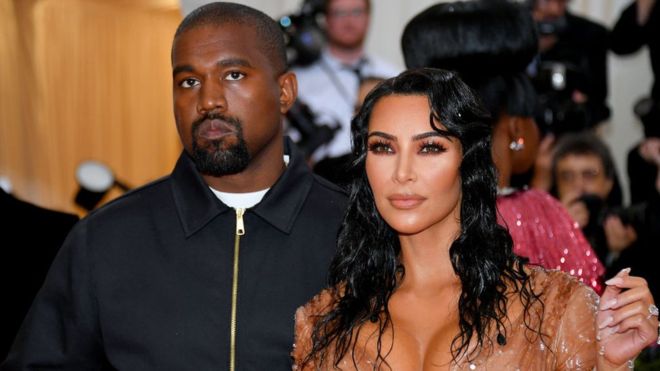 Hip-hop and fashion trailblazer Kanye West has spoken out against his wife, Kim Kardashian, for wearing revealing dresses in public, saying that the way she presents herself in public negatively affects him as a born again Christian.

The celebrity couple quarreled on a recent episode of their show, “Keeping Up With The Kardashians”, after West spoke out against Kardashian’s decision to wear revealing clothes in public. However, she responded that she was on a different path to him.

The debate was sparked by Kardashian’s decision to wear a tight-fitting Thierry Mugler dress to the 2019 Met Gala Ball. The designer dress had been made in skin colour to give the impression that she was naked with water dripping down her body.

West said to his wife: “I just went through this transition from being a rapper, looking at all these girls and looking at my wife, like, ‘Oh, my girl needs to be just like the other girls showing her body off’.

“I didn’t realize that that was affecting my soul and my spirit as someone that’s married and the father of now … about to be four kids. A corset is a form of underwear. It’s hot. For who, though?”

West has famously been hosting weekly Sunday Service events throughout the year, which have attracted thousands of attendants. The events feature gospel music by West and his band, and more recently, sermons have also been introduced.

Kardashian responded to her husband: “You’re giving me really bad anxiety. You knew last night I was having really bad anxiety and I don’t need any more negative energy, for you to say you’re now not into me wearing a tight dress.”

To which West replied, “You are my wife, and it affects me when pictures are too sexy.”

However, Kardashian retorted: “You built me up to be this sexy person and confidence and all this stuff, and just because you’re on a journey and transformation doesn’t mean I’m in the same spot with you,” according to Christian Today.

The exchange ended with West simply replying “OK” before he walked out the room.

Recall that Kanye has been open about his new found faith in Jesus Christ, and recently, during a Sunday service held in an Atlanta, Ga., testified about how Jesus Christ saved him.

Popular hip-pop singer, Nicki Minaj, while hosting “Queen Radio” on Apple Music, also revealed that West told her he turned to God after being hospitalized and diagnosed with bipolar disorder in 2016. She made the announcement during a discussion about faith in the entertainment industry with special guest Chance The Rapper, who recently went on a sabbatical to “learn the Word of God.”

Pray for Kanye West as he goes through this transformation period in his new found faith in Christ Jesus.

I beseech you therefore, brethren, by the mercies of God, that ye present your bodies a living sacrifice, holy, acceptable unto God, which is your reasonable service. And be not conformed to this world: but be ye transformed by the renewing of your mind, that ye may prove what is that good, and acceptable, and perfect, will of God. For I say, through the grace given unto me, to every man that is among you, not to think of himself more highly than he ought to think; but to think soberly, according as God hath dealt to every man the measure of faith. (Romans 12:1-3).