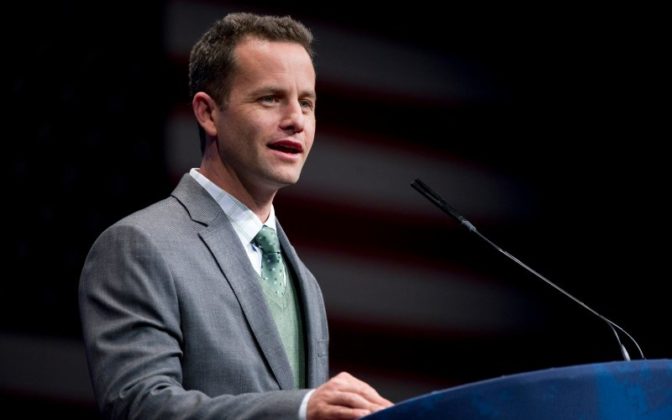 Kirk Cameron is an American actor best known for his role as teen Mike Seaver in the US television sitcom Growing Pains (1985–1992), a role for which he won two People’s Choice awards and was nominated for two Golden Globe awards. Kirk’s acting career has included many subsequent TV roles and movies, including faith-based films such as the Left Behind series (2000–2005) and Fireproof (2008). To many, he is better known for his overt public stance on his Christian faith.

I first met Kirk while flying to upstate New York for a CMI speaking tour. I offered my seat to a young man so that he could sit next to his brother, and later learned that the siblings were sons of Kirk Cameron, who was on the plane with his family. They had just finished a week in Georgia at Camp Firefly, a charity founded by Kirk and his wife, Chelsea, 20 years earlier, to provide a much-needed week-long fun-filled vacation for terminally and seriously ill children and their struggling families. I had the privilege of speaking to Kirk about his life and family, and what it’s like to be the rare combination of a Hollywood celebrity and a Christian.

“I grew up in a family where we never went to church and God was not spoken of; He was never part of the conversation”, Kirk said, adding, “Science was one of my favorite subjects. I loved cosmology, biology, anthropology.” Like most people, Kirk was taught that evolution is an immutable scientific fact. “My science teacher had a very charismatic, dynamic personality. And he would laugh at the idea that there was some mystical voodoo power in the sky … we were simply evolved and science knew how it all happened,” Kirk said. “We were taught that there were people far more intelligent than we were, as 8th, 9th and 10th grade students, that understood these things, and God was just a fairytale—so that’s what I believed.”

Most young people want to be seen as rational, and this was no different for young Kirk. “I wanted to be counted among the intellectuals, and those who reasoned through things based on the evidence and facts.” As is the case with the majority who are taught that evolution is the only rational scientific paradigm, any reasonable consideration of a divine Creator was logically excluded. Kirk quipped, “I believed God was part of a different trinity: the other two were Santa Claus and the Easter Bunny.”

He had a few friends in school who believed in God, had some friendly debates with them, and went to church once or twice. Despite this, Kirk said, “I had some significant hurdles to overcome, and they were primarily rooted in my evolutionary atheistic beliefs. Like, we evolved, didn’t we? Scientists have proven that.”

So how would an upcoming celebrity and self-described atheist come to know Christ?

At 17 years old, Kirk found himself right in the middle of the phenomenal success of Growing Pains. He described one of the main reasons he didn’t believe in God: “It was the appeal of doing what I wanted. I was a celebrity. I had money, insane popularity, nobody said, ‘No’ to me, it was always, ‘Yes, sir.’ So it didn’t make sense to consider a higher authority over me.”

But even though he rejected God, he still had questions. “I was crushed in the middle of a very adult world and asking a lot of adult-sized questions, like, ‘What happens when you die?’ ‘What’s the meaning of life?’ ‘Is it to make as much money and have as much fun as you can?’ I was beating most people in those last two categories and yet I sensed there’s got to be something more meaningful than all that.”

Exposed to the Creator

“God wasn’t even a consideration, until I was in high school, when I met someone who took me to church.” There, Kirk heard a message that was very new to him. The pastor told Kirk, “There are answers from the Bible. We didn’t get here by some accident. You and I were not the unintended result of a process of time and chance that never had us in mind. In fact, we were created by an all-powerful, wise, loving, and just God; and our lives have purpose and meaning. In fact, there is a cosmic drama being played out between good and evil, and God wins.”

That was a life-changing moment: “The chink in the armour was that there are a lot of really smart people who believed in God and who were Christians. I found out that creationists have intellect in spades on their side. That opened the door for me to the claim that there is a God.”

Kirk began to really investigate Christianity, and as a consequence, soon after submitted his life to Christ.

For years now, Kirk has been well-known as an outspoken evangelist and apologist for the Christian faith. His experience as a former atheist helps him understand and relate to others who still do not believe. I asked Kirk what strategies he uses when sharing his faith with unbelievers who still believe evolution is an undisputed scientific fact. “Atheists will tell you that evolution really explains everything,” Kirk said. He uses analogies to help explain how we can tell there is a Designer. “When you look at a painting, how do you know there’s a painter when you can’t see him, touch him, feel him or speak to him? Paintings don’t paint themselves. Those things usually register with most people.”

Advice when challenged in public

Kirk is a celebrity who openly lives his Christian faith in the public eye, and this often results in public confrontations that turn into headlines. I asked Kirk what principles he uses to respond to these challenges in a biblical manner. “I tend to stick to the principle of speaking the truth in love. I fall back on sincerity all the time,” Kirk said. “Your personal testimony often speaks volumes. It’s my faith in the Word of God and the faithfulness of God that resulted in me being married to the same woman for 25 years, which is something like 250 in ‘Hollywood years’, and living like we do with six kids, and being able to work on things that I’m passionate about.”

When asked what advice he might give believers on standing boldly for their faith when challenged in public, Kirk responded, “It’s very difficult to stand if you don’t have something solid that you are standing on. So I would say, first of all, be sure you are standing on the truth. That’s the only solid ground to argue from, when you know something is genuinely and sincerely true.” Kirk added, “The most meaningful purpose of apologetics is to strengthen the believer. If you are arguing based on your feelings or hopes and wishes, people are going to push you over. So get your own questions answered for yourself first.

“Second, make sure you have a life that backs up what you say. Don’t be a religious showoff or some sort of a hypocrite whose life speaks more loudly than your words and undermines everything you say. You’ll know a tree by its fruit.

“Third, don’t allow others to push you into a trap. Learn to discuss these things by honing the argument and directing the narrative yourself.” Kirk gave an example by adding, “When someone says to me, ‘Kirk, when did you stop believing in reason and start believing in God?’ I will immediately say, ‘That’s the wrong question. What actually happened was that I blindly believed that nothing created everything, which is illogical. Then I started looking at the facts, and reasoned through them and came to the obvious conclusion that God made all of this.’”

Know what and why you believe

“Being able to know what you believe and to know why you believe is critically important. And we need to have intellectual integrity, to know we are standing on solid ground.” However, Kirk was quick to add, “Not everybody needs to have all the answers at the tip of their fingers, but we must have a basis of understanding that there are answers. I often find them through ministries like yours.”

We must remember that there are so many who, like Kirk, need to be told about the ‘chinks in the armour’ of evolution, and the truth of the life-giving Gospel. Who around you needs to hear? Who around you might be like Kirk Cameron once was, needing someone to share the truth of the Bible with them? Perhaps we can take a page from Kirk’s life, and be ready to share the truth of Scripture, remembering the words of 1 Peter 3:15, which commands us to be “ … prepared to make a defense to anyone who asks you for a reason for the hope that is in you; yet do it with gentleness and respect.”