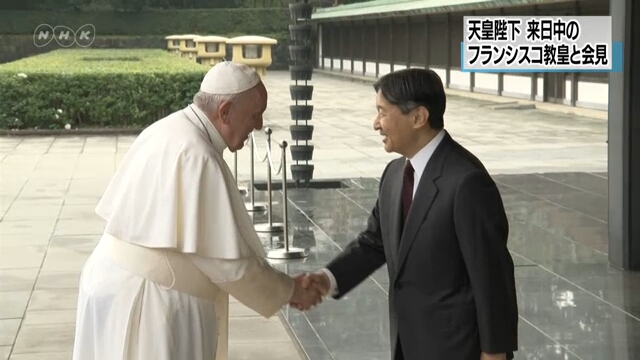 The leader of the Roman Catholic Church entered the palace grounds from the main gate shortly before 11 a.m. Pope Francis was escorted by police motorcycles and patrol vehicles across the Nijubashi bridge.

The Emperor greeted the pope at the south porch where they shook hands and smiled.

It’s the first time the Emperor has met Pope Francis. He met John Paul the Second at the Vatican in 1984 while he was studying in Britain.

The last pontiff to visit the Imperial Palace was John Paul the Second, who met the then-Emperor Showa in 1981.

Monday’s visit lasted for about 20 minutes in the Take-no-ma audience room.

The Emperor saw the pope off at the south porch. He kept waving until his vehicle moved out of sight.