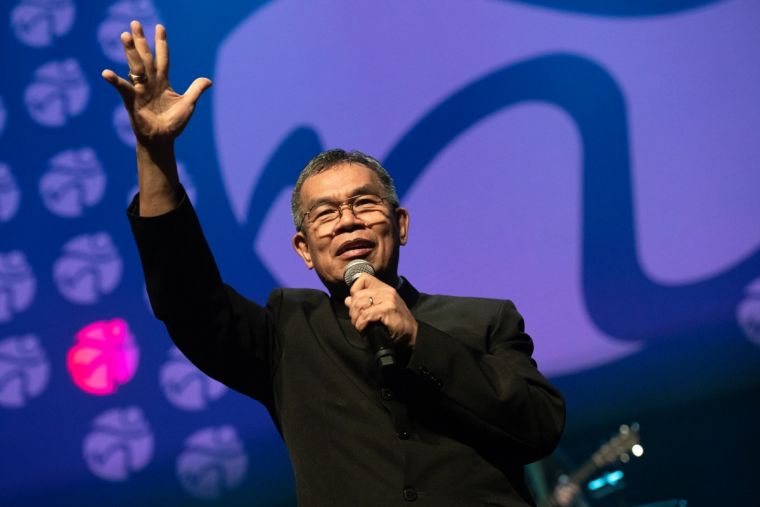 The World Evangelical Alliance General Assembly closed on Tuesday night with a call to “sense the urgency” of the need for the Gospel today.

George Verwer, founder of Operation Mobilisation, delivered the closing address in which he issued a stark warning against time-wasting.

“I really feel that in the average evangelical today, there is a lack of urgency,” he said.

“Today I want you to search your heart.  How do you use your time?

“I feel so many Christian leaders, even within my own movement, they seem to be able to just waste time.

“And many, when I interview them, are hardly talking to any non-believers about the Lord Jesus.

“We need to be reaching out to those who don’t know Christ. We need to be aware of the Christian ghetto that we can get into.”

It echoes a call that the delegates, who hailed from 92 countries, heard earlier in the General Assembly, held in Bogor, near Jakarta, Indonesia, over the last week.

Goodwill Shana, President of the Association of Evangelicals in Africa,  not to ignore the plight of the suffering.

“We cannot act as if we have not been told about the poverty in the world, about the human trafficking, about the women and children who are abused daily.

“We cannot pretend that we cannot see how bad the situation is.”

During the closing ceremony, Indonesian Minister for Home Affairs, Tito Karnavian, said that the majority-Muslim country was “honoured and really proud” to host the World Evangelical Alliance’s General Assembly.

In an address, he said that Christianity could be a positive influence over radicalised Muslims tempted to join terrorism.

He also appealed to evangelicals to help in the fight against global terrorism by putting pressure on their political leaders back home to work towards peace, particularly in Syria and Iraq.

“You can contribute to create peace,” he said.

“We should push our leaders to help to create peace in the centre of gravity of the problem today, which is in Syria and Iraq.

“As long as there is this in Syria and Iraq … if war is there, then the rest of the problem will spill over [to other places] whether Indonesia, the United States…New Zealand.”

“If other religions such as Christianity could give an example as a good model, as a good religion, a peaceful religion, I believe that those bad guys, they will be ashamed and hopefully they will regret if they are doing wrong.”

It is the first time in over a decade that members of the World Evangelical Alliance have met together after their last General Assembly was held in Pattaya, Thailand in 2008.

Over the course of six days, beginning last Thursday, nearly 1,000 evangelical leaders from around the world discussed the challenges affecting the global Church, including the co-working of older and younger Christian leaders, disciple making, and reaching the world with the Gospel.

They also heard the vision from Bishop Tendero about plans for an “ambitious” global expansion of the WEA over the next decade, which includes establishing a national alliance in every country in the world.

In the closing ceremony, he prayed over delegates and commissioned them to go out into the world and do their part in finishing the Great Commission.

Before closing, the General Assembly adopted a pledge to present evangelicalism with “sensitivity, intentionality and boldness