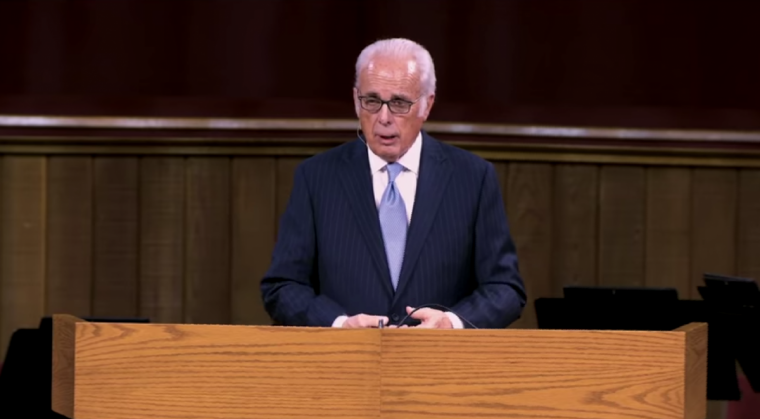 John MacArthur is standing by controversial comments he recently made about women preachers.

The pastor stunned the evangelical community several weeks ago when he  on women pastoring and preaching in churches during the ‘Truth Matters Conference’, held at his Grace Community Church in California last month.

Asked during a panel discussion to give his opinion on the popular author and speaker Beth Moore, he said she should “go home”.

“Go home! There is no case that can be made biblically for a woman preacher. Period. Paragraph. End of discussion,” he said at the time.

“Just because you have the skill to sell jewellery on the TV sales channel doesn’t mean you should be preaching. There are people who have certain hawking skills, natural abilities to sell, they have energy and personality and all of that. That doesn’t qualify you to preach.”

He added: “The #MeToo movement again is the culture reclaiming ground in the Church. When the leaders of evangelicalism roll over for women preachers, the feminists have really won the battle.”

Several evangelical leaders chastised MacArthur over the tone of his comments, with author Max Lucado “grieved” by them and that “the bride of Christ is sighing”.

“Really? Dare we be dismissive? The message of #metoo is a sobering one,” Lucado said on his website.

“Theirs is not an appeal for power or position, it is a request to be taken seriously; for all of us to recognize their unique calling. Respect and common courtesy should be the dialect of the church. Yet, our soprano chorus continues to decry its absence.”

In a YouTube video, pastor Shane Idleman said MacArthur’s outburst reflected “a real lack of humility, a lack of brokenness, a lack of just love and compassion”.

Several weeks later, MacArthur shows no sign of backing down, telling his congregation in a sermon last week that “empowering women makes men weak” and that “weak men make everybody vulnerable to danger.”

“Today, I want to address a very important issue that has been stirred up on the internet with me kind of in the middle of it,” he said.

“I do not like to give short answers. I don’t like to get put in a position to do that, because I feel like that just escalates confusion, so I want to take the opportunity to address the issue of women preachers this morning and to give you a more thorough answer from the Word of God on this very, very important subject.”

He went on to say that there is “no lack of clarity” in the Bible when it comes to the role of women in the church, citing 1 Corinthians 14:35, in which Paul says that “it is improper for women to speak in church meetings.”

Explaining his own views on the issue, MacArthur said: “Women are to maintain submission to men in all churches in all times.

“Women who pastor and women who preach in the church are a disgrace and openly reflect opposition to the clear command of the Word of God. This is flagrant disobedience.”

He then quoted 1 Corinthians 14:34, which reads, “Women should remain silent in the churches,” and said that this should not be “hard to understand.”

“You don’t say anything,” he said.

Later in his sermon, he said that Christian women “need to get themselves under control and realise they are not to speak in a church.”

Otherwise, he said that men would be “conquered”, which in turn would lead to women being conquered.When all the men have been slaughtered, you [women] can sit there with all your jewelry and junk. You’ve been conquered, because you overpowered your protectors,” he said.

“Don’t misunderstand this: This is what we are living in today. Empowering women makes weak men. Weak men make everybody vulnerable to danger.”

“And if you look carefully at our nation, you would have to agree that it’s childish, young, inexperienced, ignorant women who are ascending into power.

“When you overthrow the divine order, the results are always disastrous. And again, it’s not anti-women any more than it’s anti-children. But it’s a divine judgment on a nation that its young and its women