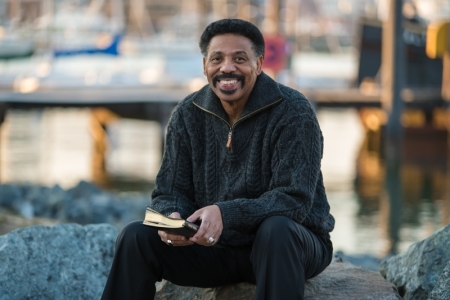 Tony Evans, pastor of Oak Cliff Bible Fellowship, has become the first African American to publish both a study Bible and a full-Bible commentary.

Evans, who has been preaching and teaching the Gospel for more than 50 years, this month released and commentary in partnership with LifeWay. “The Tony Evans Study Bible includes extensive study notes and other ancillary resources to assist in both men’s and women’s Bible study that are carefully crafted and curated by Tony Evans as general editor and adapted from his sermons, teachings, and writings,” reads the book’s description.

“These features are strategically placed alongside the biblical text to explain God’s Word in a fresh way. Applying these truths will empower readers to have transformed lives and transfer the values of the Kingdom of God to others.”report this ad

In an interview with the 70-year-old founder of the Urban Alternative revealed that The Tony Evans Study Bible is the result of “seven years of intense work,” adding he wants to promote a “specific worldview.”

“I believe the Bible has a very specific worldview, which is the glory of God through the advancement of His Kingdom. And so I wanted to thread that worldview through the Bible and the commentary,” he explained. Evans, who in 1982 became the first African American to earn a doctorate in theology from Dallas Theological Seminary, also highlighted black presence in Scripture. He mentioned Ham’s lineage dating back to African people; Moses’ wife, Zipporah, being the daughter of an African priest; and, an African presence in the church of Antioch.

He revealed that “early on” in the Bible, “God was dealing with racism and interracial marriage.”report this ad

“What I want to say to African Americans is if you see what’s really in the Bible, you can find yourself there,” he told RNS. “You don’t have to lose yourself to believe in Jesus. In fact, much of who we are is in Jesus.”

During the event, Evans received the Lifetime Achievement Award from Dallas Theological Seminary. Additionally, Anthony Evans Jr. took the opportunity to tell his father that the Museum of the Bible in Washington, D.C., will be placing his Bible commentary on permanent display.

Evan’s daughter, Priscilla Shirer, captured the moment in an  “This is the look of a man. When he is being given the Lifetime Achievement Award from  & is then told by his son that the  in Washington, D.C. will be putting his commentary on permanent display for his accomplishment. Well don ….Well done Daddy,” she captioned the photo. report this ad

During the event, CCM artists Lecrae and Franklin Evans as the father they needed, in person or through his radio broadcast.

“I never had a chance to dance with my real father, but for everything I’ve lost, I now have gained,” Franklin captioned a photo of the event.

with The Christian Post, Evans described strong male leadership within the family as a necessary foundation for a thriving, God-honoring society.

“In Moses’ day and in Jesus’ day, they killed all the males because they wanted to control what was happening in a community of people among the Jews,” he continued. “So what the enemy is doing is trying to get rid of the males psychologically, emotionally, and functionally, and that’s what culture is currently doing.”

Evans noted that in the African-American community, for example, almost 70 percent of children are born to single mothers, meaning the majority of children are raised without a positive male influence in their lives.“Then, you’re on the precipice of disaster as a community,” he said. “Not because the women aren’t great, but you’ve asked them to do more than what they were created to do. So getting back to the right view of marriage and a right view of family is critical, and that starts with the right view of man.”