Will You Lead Us In Prayer? 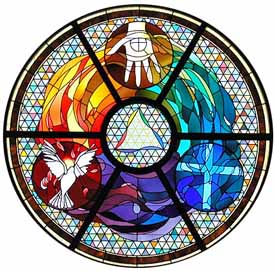 Family members had come from across the country when they heard that Floyd was dying. It came so suddenly. He had enjoyed good health in spite of his advancing years, and then a stroke. As Floyd, who as father and grandfather and brother, lay in a coma with little hope of recovery, I watched as one of his sons, a strong Christian, had the family join hands together around the hospital bed, and led in a simple prayer. It was as if heaven came down into that circle. Fear of death, grief at seeing a loved one slipping away, were all brought before a loving heavenly Father. Floyd was brought before Him, too, and released to Him. Afterwards we sang “Amazing Grace” together. Tears flowed freely, but now tears touched by God and mixed with love and faith.

Floyd passed away within the week, but that prayer had changed the family and brought them nearer to God. It’s a moment few of them will forget.

Christians sometimes take prayer so much for granted that we forget those who don’t know how to pray, who don’t really know this God that we know, and who so desperately need and appreciate spiritual leadership in times of crisis and stress.

Leading others in prayer can be a dry exercise in formal holiness, or it can be a doorway into the presence of God. This sort of prayer does better without “thee’s” and “thou’s” which keep God at a distance. It’s better prayed informally with “Our Father” or “Dear Lord” rather than to some distant Deity. Much better are honest expressions of our feelings and needs expressed from the heart than the carefully crafted petitions from a prayer book. People so much need to know they can talk to God themselves.

My dad was over six feet tall, a giant to me as a boy. When I was five or six and couldn’t see over the heads of a crowd, I would extend my arms to him, and he would lift me up, holding me so I could see everything from the same level as his eyes.

While we can’t substitute our faith for someone else’s, we can lift them up through our prayers so they can see God as we see Him, so that in our prayer they can talk to Him as we have learned to talk to Him. The experience of seeing God from our eye-level can be transforming.

We need to learn to lead in prayer. How many Thanksgiving and Christmas dinners are bereft of their special significance for lack of a Christian who offers to lead out in a holiday prayer? One person leading the family can lift hearts and minds to God. Without prayer leadership, family members are left to fend for themselves spiritually on these special days. Sadly, they seldom know how to turn to God, though their emptiness has often created a spiritual hunger which responds warmly to an opportunity for intimacy with God.

Recently, I was invited to Tel Aviv to speak at a business conference sponsored by the Israel Export Board. The night I arrived, my host and his wife took me out to dinner to a wonderful restaurant along the waterfront of the ancient port of Joppa. After ordering we talked about our families and got acquainted. Then, as the entree was served, I began to bow in silent prayer, as is my custom around others who don’t share my faith. But instead, on impulse, I found myself speaking to my hosts, “Let’s pray together and thank God for the food.” What could they say? So I led in prayer, a simple prayer thanking God for a safe flight, and for my new friends, for the food, and for the safety of their son in the army. After the prayer was over, I could see the glint of moisture filling their eyes. The next day, when we took a flight in a private plane, my host asked if I was afraid. I said “No.” He said to the others, “Ralph is praying for us.”

For the next several days, I found it easy to ask various Jewish business associates to join me in prayer before meals; they didn’t seem offended but appreciative. One evening I had dinner with a brilliant agnostic physician-turned-businessman. As was my new custom on this trip, I said, “Let’s pray together” and prayed a simple prayer, offering up to God some of the needs and struggles which had been shared in the conversation up to that point. The agnostic was visibly moved by the prayer, and initiated a conversation about religion. I could never have started at so deep a level of sharing with anything I could have said. Leading in simple prayer had broken through the barriers and stimulated a response several stories below the surface.

You don’t have to be a pastor to lead in prayer. If you aren’t, so much the better, since your prayer will be that much more real and unexpected. You don’t have to be eloquent. The simpler the better, since the people with whom you are praying need to be able to place themselves within your prayer. The more complex your prayer, the more they feel they could never come to God like that. Your family at home, too, needs someone to model prayer for them day by day, to learn how to lift their concerns before the throne of God.

While we shouldn’t be pushy, we need to be lovingly bold like our Master. Respectful, sensitive, but unwilling to be intimidated by the profanity and lack of faith which surround us. We need to be willing to lead. Leading others in prayer is a way of taking their hand — if only for just a moment — and placing it into the hand of God. Who knows? They may like the feel of that strong hand, and reach for it again themselves some day soon.