Just What Is the Gospel? 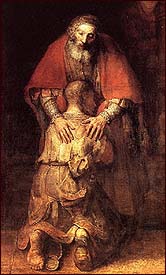 “I would like a simple and direct answer to the question: ‘What is the Gospel?’ Many of our pastors talk about it in their sermons only vaguely.”

What a wonderful question! But if I answer simply, I’ll get in trouble with somebody who will chide: “You forgot this!” or “You left that out!” At the risk of angering someone, let me make it crystal clear:

In a nutshell, the Good News is that God loves us so much that he sent Jesus to deal with our sins so that we can be forgiven, be drawn close to our Maker, and live with him forever. We come to God because we believe that this is indeed true.

That’s it. Simple. And, when you think about, it is very, very good news! Being simple, however doesn’t keep it from being profound. Someone once said the gospel is simple enough for a toddler to wade in and deep enough for an elephant to swim in.

One famous Bible verse sums it up pretty well. The verbs in this verse tell the story:

“For God so loved the world that he gavehis only Son, so that everyone who believes in him may not perish but may have eternal life.”2

Your Deepest-Held Belief Determines Your Course

When I explain the simplicity of the Good News, somebody always asks: “Don’t I have to dosomething?”

The answer is: “No, just put your trust in Jesus.”

Of course, we’re not talking about mere intellectual assent.3 We’re talking about the deeply-held conviction that Jesus is who he says he is. The Bible calls that faith. God knows that we will live out our deepest-held beliefs, whatever they are. We can’t help it.

You protest: I believe, but I’ll sin. I’ll blow it. I know I will! Yes. But the Good News is that God has decided not to allow sin to keep you from him any more. Ask him to forgive you, he does, and the relationship between you and God is clear again.

St. Peter, obviously mad at someone, asked Jesus: “How many times do I have to forgive someone who keeps sinning against me?” Jesus must have smiled as he said quietly and cryptically: “Seven times seventy.”4 Now don’t get legalistic on me, do the math, and claim that you can stop forgiving at 490. That isn’t the point! Jesus was saying: the perfect number times the perfect number times 10 for good measure. In other words, we can never stop forgiving someone who asks our forgiveness.

If we aren’t to stop forgiving, I’m sure God doesn’t either. All your sins combined don’t compare to Jesus’ sacrifice on the cross for your sins — but that’s getting theological, just what I promised not to do. The bottom line is: you can’t out-sin God’s love!

I think the very best part of the Good News is that God loves you. He is not just aware of your existence. He actively loves you! He cares about your life, about what’s troubling you. And he longs to draw you into his embrace the way an affectionate parent would reach out to a beloved child and draw him or her very close.

Jesus told the story of a man with a wayward son. Still in his teens, the young man is bored at home. He asks for his share of his father’s estate in cash up front. With that in hand, he proceeds to blow through the money on wine, women, and song in the big city. When his money runs out, he is too poor for rehab. He hits bottom. He is homeless, starving on the street. One day he realizes that his father’s employees are better off than he is. He decides to go home, beg for forgiveness, and plead for a job. Before he has scarcely turned onto the street to the house, his father sees him, runs out into the road, and throws his arms around the boy. The son tries to say his prepared speech, but there is no need. The son who had been “dead” is now home, and that is enough. The son who left home in disgrace returns to overflowing love.