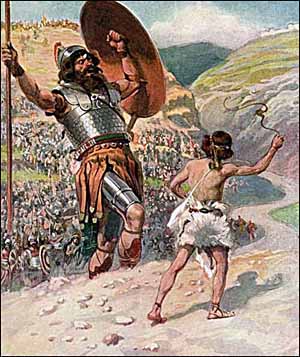 outh advances slowly across the narrow flat valley towards his opponent. On the other side stands a giant of a man bellowing insults, but David doesn’t seem afraid.

The giant comes with state-of-the-art military equipment — scale body-armor, helmet, and greaves to protect his legs. He carries a spear and a sword, with a javelin slung across his back. Goliath towers over the soldier who bears his shield.

The teenager, on the other hand, is clad in the simple garb of a shepherd. He carries a staff for close quarter fighting, but that is all — that and a crude sling he has woven.

The boy pauses and kneels at the stony stream bed as the giant keeps up a steady barrage of foul boasts. The lad patiently examines the river rocks made smooth by the tumbling of winter rains. He is seeking stones just a bit larger than a golf ball that will fit into his simple sling. He seems in no hurry. When he has selected five, he slips them into his pouch and stands up.

The massive warrior seems insulted that his opponent is just a lad. “Come here, boy,” he yells. “When I’m done with you, the vultures and the coyotes can eat what’s left!” Goliath has worked himself into a rage.

But the boy is not intimidated.

“You come against me with sword and spear and javelin,” he shouts, “but I come against you in the name of Yahweh Almighty, the God of the armies of Israel, whom you have defied. Yahweh doesn’t need a sword or spear to save. For the battle is the Lord’s, and he will give you and the entire Philistine army into our hands!”

The giant Philistine is trusting in his size, his weaponry, and his long battle experience. But David is relying on the Lord. And in that faith he begins to run towards the slow-moving giant.

When he has come within range, he stops, places a stone into his sling, and begins to swing it round and round, faster and raster. The whirring, buzzing sound increases until the boy, trained by years of practice in the sheep-fields, lets it fly. The hefty stone speeds at nearly 100 miles an hour and strikes Goliath square in the forehead. Its force topples the giant who is dead before his massive body crashes to the ground.

It’s easy to misunderstand this famous story. The young boy against the warrior-giant. David’s puny sling vs. Goliath’s state-of-the-art weaponry. The weak against the strong. But that’s not the point. The sling is a lethal military weapon in skilled hands – and David has practiced long hours in the sheep-fields to perfect his technique against the predators that threaten his flock.

The point is that the Giant trusts in his prowess, while David’s boldness comes from his absolute faith in the Lord his God — that God will help him. And so David overcomes his natural fear to face the giant because he knows that his God is bigger than the giant.

What are you facing? Have your fears have immobilized you? Do you imagine that it’s you alone against your giants?

Learn from David! He understood the key element: “The battle is the Lord’s.”

Your battles are not your own if you belong to Jesus. He will help you no matter how lopsided the odds seem to be. For this is not you against the giant. Your giant is puny compared to Almighty God. With God, it’s not an even battle! And if God is for us, who can be against us?

Two key truths will make the difference for you, if you can grasp them, believe them, and act in them.

First, the Lord is with you!

And second, it’s not your fight any longer. The battle is the