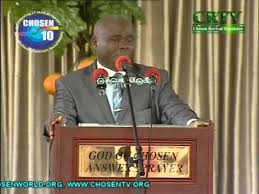 The Lord’s Chosen Charismatic Revival Movement (popularly called Lord’s Chosen) is a Nigerian Christian megachurch founded by Lazarus Muoka.[1] The church which has its headquarters located along the Oshodi-Apapa Expressway in Surulere local government area of Lagos State started with a few people and went on to experience rapid growth with over 300,000 branches all over the world.[2]

In 1994, Lazarus Muoka claimed to have had a vision from God instructing him to leave his former church to form what is now known as The Lord’s Chosen Charismatic Revival Movement. The church which was founded on 23 December 2002 commenced service on 24 December 2002 with a few pioneer members in a rented apartment at Ilasamaja, a town in Mushin, Lagos.[2]

Due to the increase in new converts in a short period, the church was moved to its present location in Ijeshatedo on a sixty plot of land which can contain over 1,000,000 members in a service.