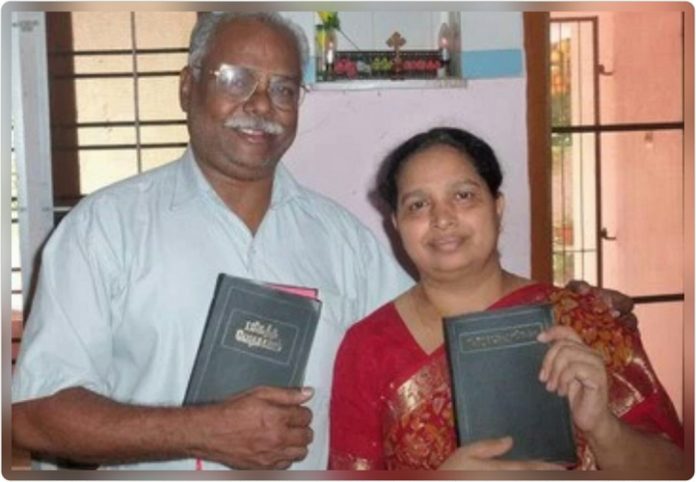 He was the son of an Islamic scholar and part of an ancient, prominent Muslim family in South Asia.

“My grandfather is the founder of the present mosque and my ancestral home is very close to the mosque,” says Paul Ciniraj, founder of Bibles4Mideast. “There was not even a single Christian in the schools where I studied.”

Ciniraj was brought up with a high regard and love for Islamic teachings and practices. He even wrote and published a book about the Qur’an.

Ironically, he attended a Christian college, and found himself in the minority as a Muslim. “I had difficulty to mingle with my classmates in the beginning. But gradually I became close and intimate with them.”

At the college he developed some “wretched” habits. “I started smoking, began to use drugs and alcohol, streaking, and being known as rowdy,” he recalls.

Damaging reports and embarrassing photos made their way into the newspaper, which disturbed his family. He considered dropping out of school.

Ciniraj found himself addicted to drugs and alcohol to such an extent that if he didn’t use them consistently, he got very tense and his body would start to shake.

“I was on the watch-list of the police. My parents cut off the money which they were giving me regularly,” he recalls. The friends he enjoyed when he had money seemed to vanish after his money wasted away. He completely lost his peace of mind.

Unexpectedly, some mission-minded students felt compassion for him and were led to share with Ciniraj about God.

“They claimed that Jesus is the Son of God who was crucified for mankind. They said He rose from the dead and He is the King of Peace. They further claimed that if one believes in Him and confesses all sins he will become a new person.”

Ciniraj was repulsed by their claims. He couldn’t begin to imagine that Jesus is the Son of God or that he rose from the dead.

“You can only reach heaven by believing in Islam, which is the true religion,” he told them. He had heated arguments with his classmates on many occasions. While they criticized his lifestyle, they couldn’t seem to overcome his arguments.

One day they brought some gospel tracts to Ciniraj. Because they were based on the Bible, which he considered forbidden, he flew into a rage.

Ciniraj tore the tracts into pieces and threw them into the Christians’ faces. “I will destroy you if you continue misleading others,” he warned.

Because he was in a Christian institution, he thought his response might provoke a reaction from authorities at the school.

The next day he went to the college armed with weapons, intending to cause violence. “When I entered the class, the missionary students ran to me and embraced me with love and joy. They surprised me by expressing regret for having caused mental distress on me.”

“I was touched by their love, kindness and gentle nature,” which disarmed his evil plan. The Holy Spirit began to convict his heart about sin, righteousness and judgment.

That night he was surprised to discover a piece of paper that someone had inserted in one of his textbooks. On it someone had written a Bible verse: “The saying is sure and worthy of full acceptance, that Christ Jesus came to the world to save sinners, for whom I am the foremost” (1Tim 1:15).

On the reverse side of the paper was written, “For the wages of sin is death, but the free gift of God is eternal life in Christ Jesus our Lord” (Rom 6:23).

Ciniraq didn’t know these were verses from the Bible.

As he pondered their meaning, suddenly the Holy Spirit came upon him, causing a remarkable vision. All the sins he had committed since childhood began to appear before him as if on a screen.

“I recognized all my iniquities, big and small. Each one of them transformed into a blister on my body. The blisters burst open and became sores. The flesh and bones, from where pus began to flow out, became very hot and began to melt. Worms were competing to get at the marrow of the bones. The pain was unbearable. The stench could not be described. I was being pulled into a bottomless pit. There was nobody to save me. I cried out, ‘God, save me.’

“Then a man, holy, white and bright, descended from heaven and touched me. I understood it was Jesus. For a moment I closed my eyes with a heavenly joy, for His touch cooled my body and mind. When I opened my eyes all the blisters and sores had disappeared from my body.”

In the vision Ciniraj found himself purified as if washed with a perfumed soap, which carried the fragrance of the Rose of Sharon. But at the same time, an incomprehensible change had taken place.

Jesus was now infected with the blisters and sores that were once on Ciniraj. “Pus and discharges were flowing out of them. Worms and maggots were roaming freely on his body,” he was shocked to observe.

“Surely he has borne our grieves and carried our sorrows; yet we esteemed him stricken, smitten by God, and afflicted. But he was wounded for our transgressions, he was bruised for our inequities; upon him was the chastisement that made us whole, and with his stripes we are healed” (Is 53:4-5).

Ciniraj had the startling realization that Jesus had taken on himself all his afflictions. “I should have been condemned to death for all my sins. But I saw Christ taking on all my sins and being crucified in my place for my sake,” he says.

Before, he never believed that Jesus was crucified. He didn’t understand how our sins could be washed away by his death, even if he was crucified.

Now he saw the truth clearly. “I was convinced how and for what Christ died.”

“I saw Jesus breaking the tomb and rising up from the dead. He was more glorious and resplendent in resurrection when he descended from the clouds. I fell at his feet crying, ‘My Lord and my God.’”

Overflowing with joy, he went to share about his dramatic experience and conversion with his parents. Although they listened quietly, they told him the vision was a trick played by Satan.

Ciniraj rejected their interpretation. “I was convinced that the loving God has saved me through His only Son and that I would inherit eternal life,” he says.

A short time later Ciniraj was baptized in water. “The Lord baptized me with the Holy Spirit and granted me gifts of the Spirit too,” he adds.

But his path would not be easy. “Some felt that my accepting Jesus Christ was an act of betrayal and they tried to take revenge.”

One day he was sharing his testimony to some of his friends near the mosque. Suddenly one of his cousins approached, drew a knife, and aimed directly at his face.

“My lower jaw was split. Everybody thought that I would die. But God saved me and made me a witness again at that place.”

The same cousin hatched a new plot to kill Ciniraj and make it appear like a suicide. He climbed up in a tree with a rope he fashioned into a noose. But a strong wind came up, he lost his balance, and he fell from the tree.

Now it was the cousin who was near death. “Instinctively I wished for his death,” Ciniraj admits. “But Jesus ordered me to love and nurse him as He had loved me when I was His enemy. At my initiative he was taken to the hospital and was in a cast for more than six months. When he recovered, he accepted Jesus as his Savior.”

He counted himself worthy to suffer for the name of Jesus and the persecution renewed his spiritual fervor.

“The Lord visited a few more people who caused trouble on me. Most of them have been led to believe in Jesus,” he says.

Ciniraj and one of his assistant pastors were severely beaten by a mob that also burned down their prayer hall. He and his wife have survived other murder attempts, but each time God saved them.

His brothers and sisters are all devout Muslims who have made the pilgrimage to Mecca. “Having let Jesus Christ into my life, I was ex-communicated and for quite some time was not allowed to have any contacts with my parents and the extended family. I and my wife felt sad about it and brought this matter to the Lord in prayers.”

Gradually, he began to re-establish links with his family. “Later I was told that just two days before his death, my father accepted Jesus Christ as his Lord and Savior because he had had a vision of Jesus with the marks left by the nails and His hands and feet. My mother too became a believer shortly before her death.”

“My deep burden is taking the gospel to the unreached, especially to the world of Islam and winning them unto the salvation of Jesus Christ at any cost.” His ministry, Bibles for Mideast, is spreading the Word of God in Asia, Africa and the Middle East by God’s grace, undergirded by prayer.source :believersportal